Unfortunately this rock shelter is on private land with no public access.
Calling Low Dale a tributary dale of Lathkil Dale is an overgrown and silent lost world off one of the Peaks most popular riverside walks.
In the Neolithic it was used as a burial site and two cists were constructed within it, one containing human bones, arrowheads and a Peterborough ware bowl. Colonel Harris who excavated here in 1936-39 also found other burials  outside the cists. 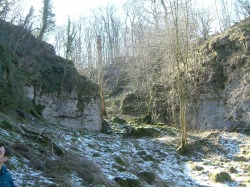 Above: Calling Low Dale upper. The rock shelter is below the limestone butress in the left of the photograph.

Below: The shallow overgrown rock shelter. 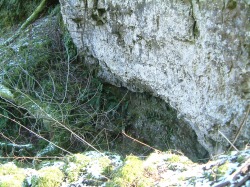