Parking at Weags Bridge SK100 543 head south along the route of the old Manifold Valley railway line for half a mile until the impressive mass of Beeston Tor comes into view.  At the entrance to the farm keep a look out for a stile that crosses the wall to the riverbank and stepping stones. The river goes underground during the dry summer months and this is the only time the cave is accessible, the stepping stones merely crossing the river to the base of the tor, the cave is further south than this side of the river bank allows you to travel.
As the river rounds the bend you need to look for a small circular cave entrance, about 6 feet off the ground in the cliff face.....St Bertrams cave is to the right of this, only a matter of feet, a fissure type entrance in the vegetation. Take a torch the cave interior is quite accessible and worth exploring.
Excavated in the 1830's and then in the 1920-30's by Wilson the cave gave up a wide range of artefacts including Upper Palaeolithic flints, Bronze Age pottery, flints and a jet armlet; along with later Romano deposits and a Saxon hoard. 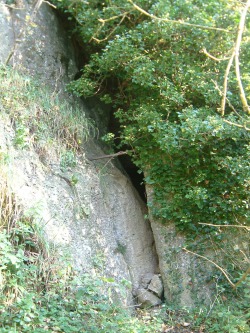 The Tor viewed from the old railway.